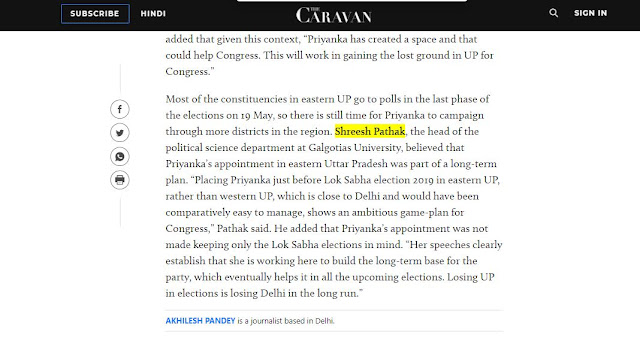 The Caravan  " Most of the constituencies in eastern UP go to polls in the last phase of the elections on 19 May, so there is still time for Priyanka to campaign through more districts in the region. Shreesh Pathak, the head of the political science department at Galgotias University, believed that Priyanka’s appointment in eastern Uttar Pradesh was part of a long-term plan. “Placing Priyanka just before Lok Sabha election 2019 in eastern UP, rather than western UP, which is close to Delhi and would have been comparatively easy to manage, shows an ambitious game-plan for Congress,” Pathak said. He added that Priyanka’s appointment was not made keeping only the Lok Sabha elections in mind. “Her speeches clearly establish that she is working here to build the long-term base for the party, which eventually helps it in all the upcoming elections. Losing UP in elections is losing Delhi in the long run.” "
Post a Comment
Read more
More posts